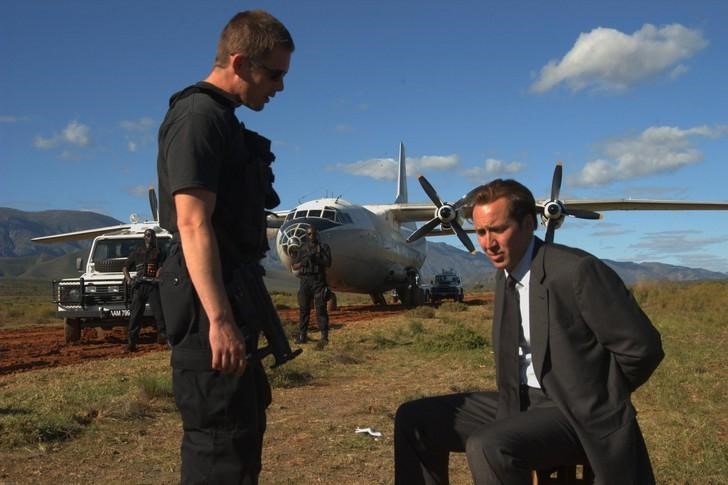 This film tells about the beginning, expansion, and fall of Yuri Orlov (Nicolas Cage), a famous arms trafficker, showing his life from the early days in the early 1980s in Little Odessa (New York), selling guns to mobsters in his local neighbourhood, to his ascension into the early 90s, where he forms a business partnership with an African warlord and his psychotic son, supplying them with an unlimited quantity of weapons. The film also charts the relentless global pursuit of Orlov by a determined INTERPOL agent, Jack Valentine (Ethan Hawke).

At the end of the film, Valentine detains Yuri and tells him that he has a long jail sentence ahead of him. However, Yuri reveals to Valentine that the very reasons that he should be incarcerated for will also set him walk free. Yuri's trade is a "necessary evil," as the people he supplies are often enemies of the United States. Yuri then predicts that a high-ranking officer will come, congratulate Valentine on his successful operation, and then order him to free Yuri because of his necessity. Surely enough, a high-ranking officer does indeed come, and Yuri is released. A free man again, he returns to selling arms.

The film tells the true story of FBI agent Joe Pistone (Johnny Depp) who went undercover for six years as "Donnie Brasco," infiltrating the Bonanno crime family in New York City. The film focuses on Brasco's cover as a jewel thief and the friends he makes to get close to the crime family operations. Lefty Ruggerio (Al Pacino) is a hit man with a disastrous personal life, and Sonny Black (Michael Madsen) is the leader of the crime group.

As an undercover mobster, Brasco has little time for his real family (a wife and three children living in New Jersey), which is a source of tension as his wife (Anne Heche) declares him to be becoming like them. Family pressure is combined with stress over spreading suspicion within the crime family that it has been infiltrated by a snitch.

Instead of showing the mob life to be fast and glamorous, the actual lifestyle is somewhat tedious and is a continuing struggle to find ways to make money. Over time, Brasco and Lefty become close friends, and Brasco realizes that when the FBI makes its arrests, Lefty will be killed by the mob for unwittingly allowing an undercover agent into the group. Brasco tries to convince Lefty to escape his criminal life. FBI agents reveal Brasco's true identity to Sonny Black and his conspirators. Lefty walks off to his implied death for letting Donnie infiltrate the gang, and Joseph is awarded with a $500 check and medal for his work.

Read the summary of the film provided by IMDb, an online database of information related to films, television programmes and video games.

Virginia "Gin" Baker (Catherine Zeta-Jones) is an investigator who works for a top insurance agency. Robert "Mac" MacDougal (Connery) is an international art thief who likes a challenge. A priceless Rembrandt is stolen from an office one night: Gin suspects that Mac is the thief, so she is sent to investigate him. She tries to entrap him with a proposition, claiming that she is an art thief. She promises she will help him steal a priceless Chinese mask from a well- guarded palace. They travel to Scotland, and plan the complicated theft at Mac's hideout, an isolated castle on a small island. While Mac is busy making final preparations, Gin contacts her boss, Hector Cruz (Patton), and informs him of Mac's whereabouts. Little does she know that the island is bugged, allowing Mac to eavesdrop on their conversation.

Just after they complete it, Mac accuses Gin of planning to sell the mask to a buyer in Kuala Lumpur, and then turn him in. Gin convinces him that her insurance agency job was a cover, and that she has planned an even bigger job in Kuala Lumpur: $8 billion from the International Clearance Bank, in the Petronas Towers. They manage to pull the job off, but Cruz warns the building's security about their plans. Realizing the crooks are in one of the elevators, the guards shut it down. Nevertheless, Gin and Mac escape, via hanging Christmas lights and ventilation shafts. Since Gin lost her parachute in the escape, Mac gives her his. He tells her to meet him the next morning at the Pudu train station at 6:30 AM. The next morning, Gin arrives at the station waiting for Mac. Minutes later from the planned time, he shows up with Cruz and the FBI. Mac nearly hands Gin to the FBI, knowing that she was a master thief herself. He explains that the FBI had been looking for her for quite some time. When he was caught, Mac made a deal with the agency to help them arrest Gin. Still, the aging thief has another plan to let her go, as he is getting old and she has got her life ahead of her. Gin persuades Mac to come with her. She holds Mac hostage threatening to shoot him if the agents follow her. However, she tricks them and boards a train, leaving them behind. As the FBI agents walk away, another train arrives, and Gin suddenly appears. She tells Mac that she still needs him for another job. The two thieves kiss as the film ends.