Examining the descriptions and definitions of organized crime in criminal codes and case studies, three primary categories of illegal behaviour emerge. These categories reflect the individual crimes that are most commonly associated with organized crime activity (Albanese, 2015). The three categories include provision of illicit services, provision of illicit goods (both dealt with in greater detail in Module 3), and the infiltration of legitimate business or government (the focus of Module 4). Within each of these categories are offences that are more specific.

The provision of illicit services attempts to satisfy the public demand for, for instance, sexual and other forms of labour that is not permitted under law as well as procuring or facilitating the illegal entry or stay of a person in a country. Specific offences in this category include trafficking in persons, including for purposes of sexual exploitation, and smuggling of migrants. More details on the provision of illicit services is provided in Module 3.

Besides illicit services, organized criminal groups also provide particular products that a segment of the public desires, but cannot obtain legally. Many people wish to buy illegal products or legal ones at the lowest price possible, regardless of where the seller originally obtained them, or unaware that the products may not be safe. Due to this demand, organized criminal groups emerge who produce, buy and sell stolen, counterfeit or falsified merchandise, i.e., stolen art and other cultural property, falsified medical products, illicitly manufactured/ traded firearms, illicit wildlife products and counterfeit food items. The stolen, counterfeit or falsified property might also consist of automobiles, jewellery, stereo equipment, mobile phones, software, or any other product for which there is a high consumer demand. More specifics on the provision of illicit goods is provided in Module 3.

The third category of criminal activities is the infiltration of legitimate business or government. An example is labour intimidation, which involves the use of force or threats to obtain money for ensuring jobs or peace at construction sites. These offences often entail threats to employers or employees that if money is not paid, there will be no job for the employees, or that violence, strikes, or vandalism will occur at the employer's companies. There is a clear connection between corruption and the infiltration of business or government, because public officials are often willingly bribed or corrupted in these cases, or are coerced using intimidation or threats. More specifics on the offences that underlie the infiltration of business and government are provided in Module 4.

The provision of illicit goods and the provision of illicit services can be distinguished from the infiltration of legitimate business in their consensual nature and lack of inherent violence, although there are clear exceptions, such as in the case of trafficking in persons. Organized criminal groups who offer drugs, stolen property, or counterfeit goods rely on the existing demand among the public to make money. Because they also rely heavily on return business, they want the illicit transaction to go well in order to ensure future illicit sales and exchanges.

In providing illegal goods and service, it is most common that members of the public who are interested in these goods and services seek out the illicit opportunities. These exchanges are usually non-violent, but violence or threats occur when one party to the transaction feels cheated or short-changed. Violence can also occur when an organized criminal group attempts to monopolize an illicit market by threatening its criminal competitors.

There are also many harms created by organized crime, and some of these are not often visible. The trafficking and provision of illicit goods and services create economic harm to the legitimate economy in supporting an underground, untaxed, illicit economy. There are also harms to health and to the victims of these crimes. The harms that result from the infiltration of legitimate business or government are associated with corruption and extortion. These offences often involve intimidation, threats, or violence, causing economic harm, in addition to harm to the legitimacy of public institutions, and the misuse of public funds for criminal purposes. 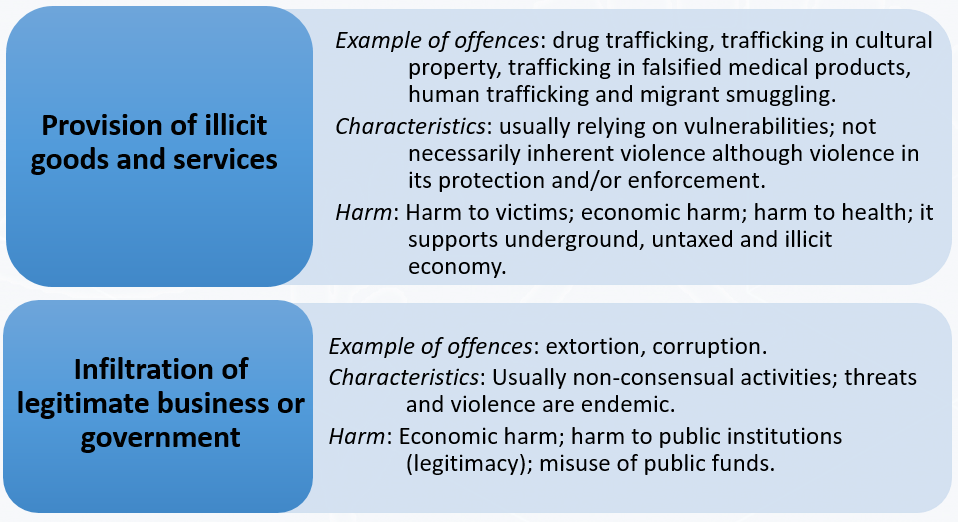 Organized criminal groups differ in their relationship to specific territories or jurisdictions. Some groups focus on a local territory and attempt to maintain monopoly control of illegal activities in the area, enforcing their control through extortion and corruption. Territorial groups include some traditional mafia groups, street gangs and maritime piracy groups. Other organized criminal groups are non-territorial, and their activities regularly cross-jurisdictional boundaries and national borders. Organized criminal groups that engage in cybercrime, environmental crimes, and firearms trafficking are usually non-territorial in nature, which create different problems for enforcement across jurisdictional boundaries (Barker, 2014; De Ruyver, Vermeulen, Vander Beken, 2002; van Dijk, 2008; Viano, 2017). Smuggling of migrants is transnational per definition. More specifics on the nature of different types of organized criminal groups are provided in Module 7.

Ethnicity or culture versus criminal markets

Ethnicity (i.e., the ancestry or culture of a particular group of people) is perhaps the most common of all categorizations of organized crime, but it is not a good descriptor. This is because criminal cases and research studies show that organized crime activities are often committed by interethnic groups, and available criminal opportunities cause groups to emerge from many different backgrounds. As Europol's Organized Crime Threat Assessment found, "Organized criminal groups are as varied as the markets they service and the activities they engage in" (Europol, 2017). Therefore, criminal markets and activities provide greater understanding of organized crime than do ethnicity or national origin (UNODC, 2010).

Both historically and in contemporary society there are many examples of interethnic and international organized crime (Block Alan, 1979; Blom and Jennissen, 2014; Bovenkerk and Siegel 2003; Siegel and Bovenkerk, 2000). Europol found criminals of more than 180 nationalities were involved in serious and organized crime in the EU, and the majority of organized criminal groups operating internationally had members of more than one nationality (Europol, 2017). Biographical attributes, such as ethnicity or culture, can help describe a particular person or group, but they do little to explain that person or group's behaviour, which requires analysis of criminal markets and activities.

Illicit activities that the public desires combined with local availability, or other opportunity factors, appear to dictate how and which type of criminal group will emerge to exploit the opportunity. It is less common, but sometimes a group will attempt to create a criminal opportunity through intimidation or extortion.

There have been many studies of criminal groups, and many have found them to be loosely organized, due to the self-interest of each participant. So highly structured organized criminal groups have been found to be less common (Adler, 1985; Antonopoulos, 2009; Ianni, and Reuss-Ianni, 1973; Soudijn and Kleemans, 2009). A mafia member who became an informer, Joseph Valachi, testified during the 1960s about his experience with Italian-American organized crime. He stated that the function of the "family" or group was mutual protection; otherwise, "everybody operates by himself" (U.S. Senate Committee on Government Operations Permanent Subcommittee on Investigations, 1963). Therefore, attention must be given to how criminal markets and opportunities work to shape particular types of organized criminal groups.

Organized crime was seen historically as masculine behaviour with women involved only for purposes of exploitation, or as silent supporters of their partners' questionable activities. In more recent years, closer attention has been paid to the role of women in organized crime activity. Women have been found to be leaders in organized criminal groups, including organizers of organized criminal activities and equal partners in crime. They have also been found to assume assistant and supporting roles, subordinate to male criminals as stable and often central support systems. Such tasks have included taking care of the finances of the organized criminal group. In trafficking in persons cases, women have been found to act as the intermediary between perpetrators and victims, often through a "promotion" from a victim to a supervisory position (Arsovska and Allum, 2014; Global Initiative Secretariat, 2017; Pizzini-Gambetta, 2014; UNODC, 2016).

Other analyses have found considerable evidence that women had knowledge and awareness of the criminal affiliations of their male counterparts, and in some cases were active participants in maintaining and concealing criminal activity (Bonanno and Donofrio, 1991; Calder, 1995; O'Brien and Kurins, 1991; San, 2011). It is likely that additional investigations will yield more evidence of female involvement in organized crime.

"Girls and young women are pulled into gangs through their lives and exposure in areas where gangs provide the principal forms of social organisation for young people ... The result is a litany of lost lives and a reinforcing of a 'cycle of gangsterism and violence' as the young children they bear are themselves vulnerable to being drawn into gang life."