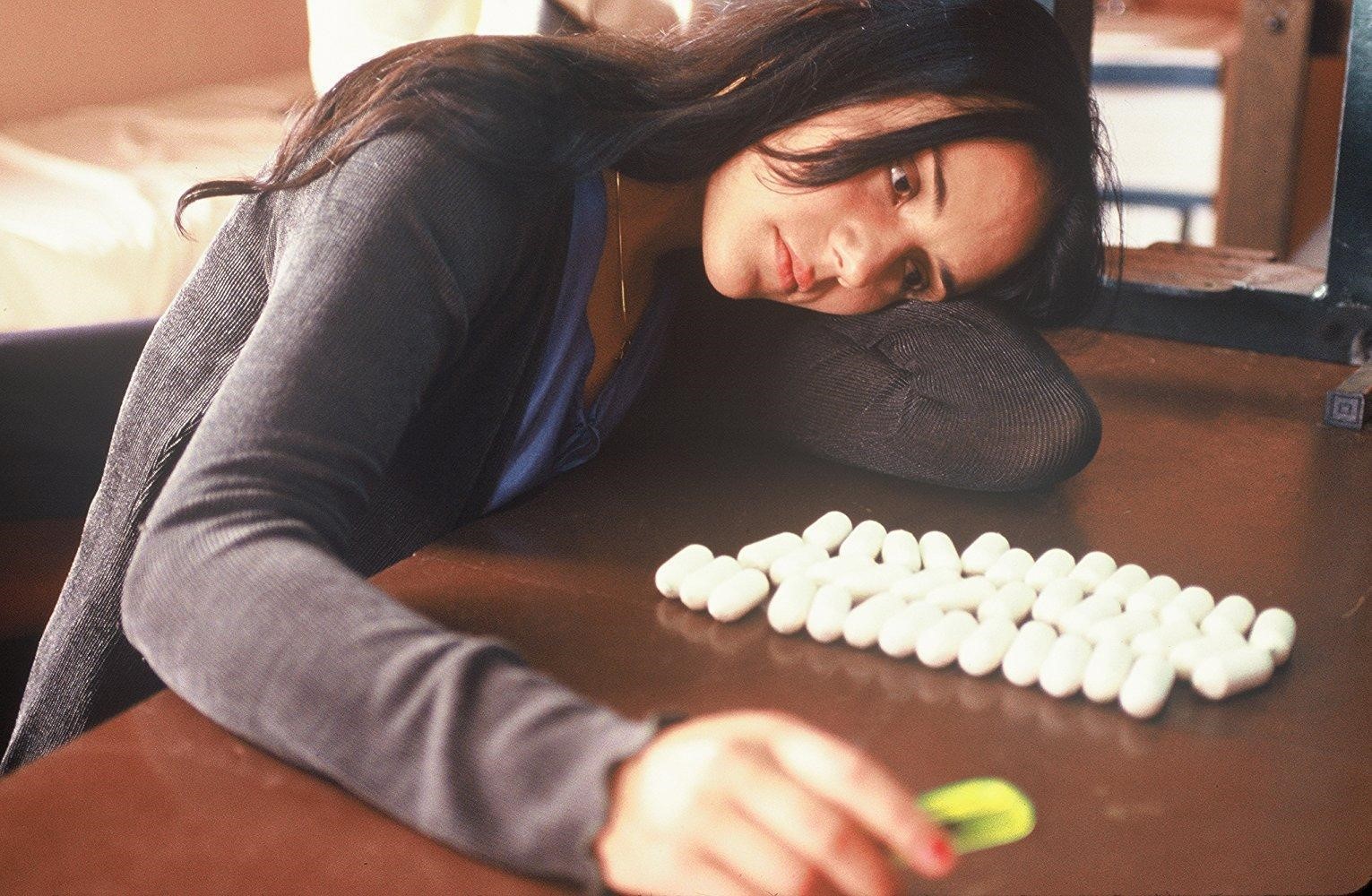 Read the summary of the film provided by the IMDb, an online database of information related to films, television programmes and video games.

In rural Colombia, seventeen-year-old Maria Alvarez works at a dead-end job dethorning roses at a factory and lives in a cramped apartment with her grandmother, mother, unmarried sister Diana and Diana's infant son Pacho. When her boss refuses to allow her a bathroom break, Maria argues with him and impulsively quits. At home, her family, who needs the money she brings in, insists that she apologize and return to her job, which is the only work available in the area. On the other hand, her friends congratulate her for being able to "kick ass."

At a dance in the local plaza, Maria and her friend Blanca become acquainted with Franklin, a handsome young man. On another day, Maria tells her boyfriend, Juan, that she is pregnant, and then deliberately instigates an argument when he offers to marry her, over whether they would live at her family's apartment or his. Admitting that she does not love him, she breaks up with him, saying she wants more than a life like her sister's.

While waiting for a bus to the city, where she is seeking work as a maid, Maria again encounters Franklin, who rides up on his motorcycle. He gives her a ride, and, on the way, offers to introduce her to someone who might hire her as a drug "mule." At first Maria is uninterested, having heard cautionary tales about heroin smugglers being jailed, but, lacking other options, she agrees to be interviewed.

Franklin takes her to meet a seemingly gentle middle-aged man, Don Javier, who asks her if she has a boyfriend, if she has any digestive complaints and if she scares easily. Satisfied with her answers, Javier explains that the job entails flying to New York with the contraband and, after passing through U.S. Customs, delivering it to his colleagues. He tells her the job pays seven to eight million pesos, or approximately $5,000. To tempt her, Javier gives Maria a roll of bills.

Undecided about taking the mule job, Maria visits Lucy, who has made the trip twice to New York. Lucy explains that she hoped to reunite with her sister, Carla Aristizabel, who emigrated to New York four years ago. Both times Lucy had gone to New York previously, she was too ashamed about working as a mule to contact Carla. Using large grapes to substitute for heroin pellets, Lucy demonstrates how to swallow them whole without choking. She says that a mule is expected to swallow sixty to seventy latex-encased pellets of heroin powder and then excrete them after arriving. She warns Maria to make sure the pellets are well wrapped, because if they rupture inside the stomach, the person will die of a heroin overdose.

Afterward, Maria learns that Franklin also approached Blanca, who has irrevocably agreed to make the trip. After telling her family that she has taken an office job in the city, Maria returns to Javier, who gives her medicine to slow her digestion, after which she painfully swallows sixty-two pellets of heroin. Then she is given $800, with a promise of full payment after delivery, a round-trip airplane ticket to New York and a passport. Finally, she is warned that her family will be harmed if even one of the pellets is not delivered. At the airport, Maria spots Blanca, Lucy and a fourth mule. During the flight, Lucy starts feeling ill and gives Maria Carla's address in Queens.

Shortly after landing in New York, the fourth mule is arrested, and suspicious customs officers search and interrogate Maria. Although the officials want to X-ray her stomach, they are prevented by law from doing so when they discover she is pregnant. Unable to prove that Maria is a smuggler, the officials release her. Outside the airport, she, Lucy and Blanca are forced into a car by two thuggish young men and taken to a New Jersey hotel room, where the women are given laxatives.

In the following hours, the women excrete the pellets, keeping careful count, and wash them off. Maria and Blanca successfully rid themselves of the pellets, but Lucy becomes increasingly ill, despite Maria's attempts to help her. While awakening from a nap, Maria sees the men carry away Lucy and afterward discovers blood in the bathtub. Suddenly realizing how much danger they are in, Maria wakes up Blanca and they flee with the pellets before the men can return.

Although hampered by their inability to speak English, they travel by taxi to Carla's address, but find no one at home. Blanca begins to act erratically and balks at entering Carla's apartment building, and when the impatient taxi driver strands them, walks off alone. Maria waits, however, and when a pregnant Carla and her husband Pablo arrive, they allow Maria to stay temporarily in their small apartment after she explains she is a friend of Lucy and alone in the city. Having nowhere to go, Blanca returns, throwing suspicion on Maria's story.

Carla takes them to meet Don Fernando, a generous Colombian expatriate who is known in the community for helping his people. Blanca, to Maria's dismay, rejects his assistance, and while fidgeting with her purse, unwittingly displays the pellets hidden inside. Seeing the heroin, Fernando advises them to return the drugs before their families are harmed. Outside, Blanca and Maria again quarrel and separate. While exploring the neighborhood, Maria discovers a pre-natal clinic, where, during an examination, she has an ultrasound and hears her baby's heartbeat.

Before she leaves, she accepts an appointment for two weeks later, although she does not expect to be in the city. She then returns to Fernando's office, where he shows her the photograph of a woman found dead, her stomach disemboweled. Maria identifies the woman as Lucy. Ordered by Fernando to tell Carla about her sister, Maria finds she is unable to do so and instead states that she has decided to return to Colombia. Carla, believing that Maria is simply homesick, tries to encourage her to remain by explaining that although she misses home, she is proud to send money to her family and grateful for the opportunities her unborn child will have. When Fernando calls Carla to make arrangements to return Lucy's body to Colombia, Maria again tries to explain. Carla, in shock and mourning, realizes that Maria has lied to her, and banishes her and Blanca from her residence.

The young women then contact the thugs, who, after threatening them, take the pellets and refuse to pay. When Maria stands up to the thugs, however, they hand over the money. Although Maria asks for Lucy's portion, to pay for her interment, the men refuse. Maria then gives Fernando her own money to send Lucy's body home. While paying her respects at the funeral home, she says goodbye to Carla and, with Blanca, travels back to the airport intending to return home. As they are about to board the airplane, Maria, holding her baby's sonogram and the clinic appointment card in her hand, decides to remain behind.

Based on an actual case, Midnight Express tells the dramatic story of a young American tourist attempting to smuggle two kilos of hashish out of Turkey, but is caught at the airport. He is arrested, and ultimately sentenced to 30 years in prison in a Turkish prison. Billy Hayes (Brad Davis) suffers the harsh and violent realities of the prison system of that period. He finds hope when his father (Billy Kellin) arrives from the US to secure his release. His father's efforts fail, however, and facing continuing horrible prison conditions, Billy opts to try to break out of jail and ride the "midnight express" (prison slang for an escape to freedom).

The movie shows how foolish conduct by Billy as a young man placed him in circumstances over which he had no control. The Turkish courts used Billy Hayes as an example to others, sentencing him to more than 30 years in prison as a drug trafficker. Hayes ultimately had two choices for release: the appeals made by his lawyer, his family, and the American government (which had been unsuccessful), or the "Midnight Express" (a dangerous gamble to try to escape).

The movie was based on a book of the same name, written by Billy Hayes about this experience. The film was nominated for Best Picture of the Year and won two Academy Awards for Best Screenplay (Oliver Stone) and Best Original Music score (Giorgio Moroder).