UNODC is a global leader in the fight against illicit drugs and international crime. Established in 1997 through a merger between the United Nations Drug Control Programme and the Centre for International Crime Prevention, UNODC operates in all regions of the world through an extensive network of field offices. It relies on voluntary contributions, mainly from Governments, for more than 90 % of its budget.

UNODC is mandated to assist Member States in their struggle against illicit drugs, crime and terrorism. In the Millennium Declaration, adopted in September 2000, Member States also resolved to intensify efforts to fight transnational crime in all its dimensions, to redouble the efforts to implement the commitment to counter the world drug problem and to take concerted action against international terrorism. In 2015, the commitment to reducing conflict, crime and violence became a central element of the 2030 Agenda for Sustainable Development, which explicitly recognizes that "there can be no sustainable development without peace and no peace without sustainable development." In this context, UNODC provides support to Member States to reach the targets established under the various Sustainable Development Goals, such as Goal 5 on the achievement of gender equality, Goal 11 focused on making cities inclusive, safe, resilient and sustainable and Goal 16 on the promotion of peace, justice and strong institutions (UNODC, 2015; UNODC, 2020).

The three pillars of the UNODC work programme are:

In pursuing its objectives, UNODC makes every effort to integrate and mainstream the gender perspective, particularly in its projects for the provision of alternative livelihoods, as well as those against human trafficking.

UNODC is the guardian of the Organized Crime Convention. It offers both legislative guides and model treaties and laws for further guidance. Legislative guides lay out the basic requirements of the Organized Crime Convention and furnish a range of options and examples that national drafters may wish to consider during the implementation of the Convention. UNODC's model laws are elaborated as tools of technical assistance. They are also developed to assist Governments translate their obligations under international treaties into national legislative provisions.

Figure 14.3 Structure of the United Nations Office on Drugs and Crime (UNODC) 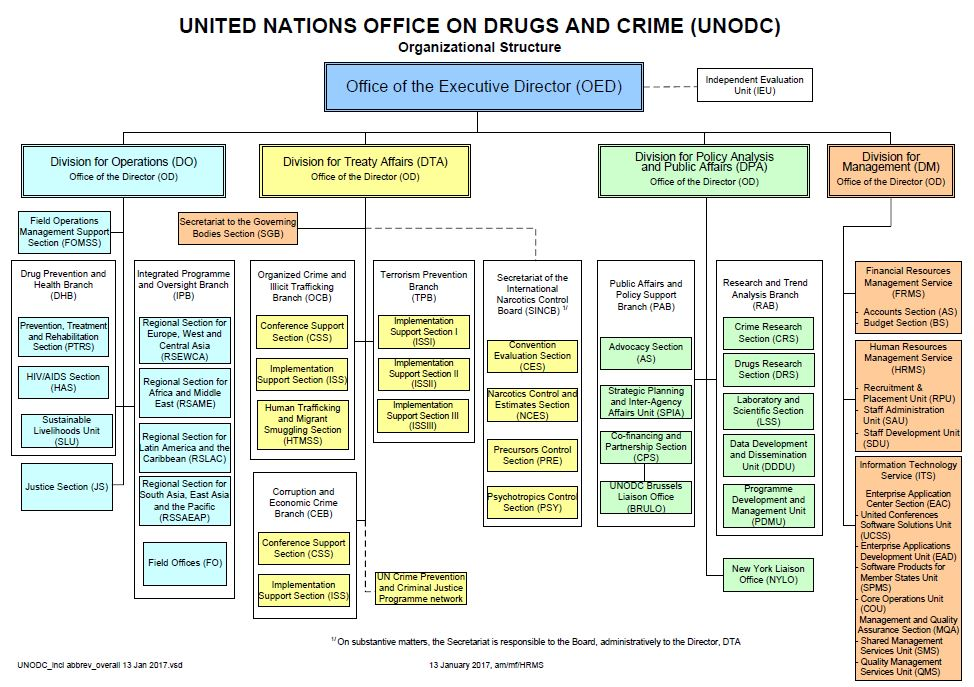 Next: Conference of the Parties to the United Nations Convention against Transnational Organized Crime