The legal distinction between bribery and extortion is not straightforward, it varies between jurisdictions and a person can be guilty of both in many instances. The debate over the bribery-extortion distinction has centred on the second type of extortion, namely the extortion under colour of official right. There is a degree of overlap between the two concepts and "extortion 'under colour of official right' equals the knowing receipt of bribes" (United States v. Holzer, 1988). Both offences involve the exchange of money, property, or services, but the manner in which the exchange occurs and the parties involved often vary depending upon the nature of the crime.

Bribery relates to a corrupt benefit given or received to influence official action so as to afford the giver better than fair treatment. Both the person giving and the recipient are guilty of bribery. On the other hand, coercive extortion by a public official is the seeking or receiving of a corrupt benefit paid under an implicit or explicit threat to give the payer worse than fair treatment or to make the payer worse off. The payee is guilty of extortion; the payer is the victim of extortion.

In other words, bribery and extortion present several significant commonalities and differences, which are illustrated in Figure 4.1 below.

Figure 4.1 Characteristics of Bribery and Extortion 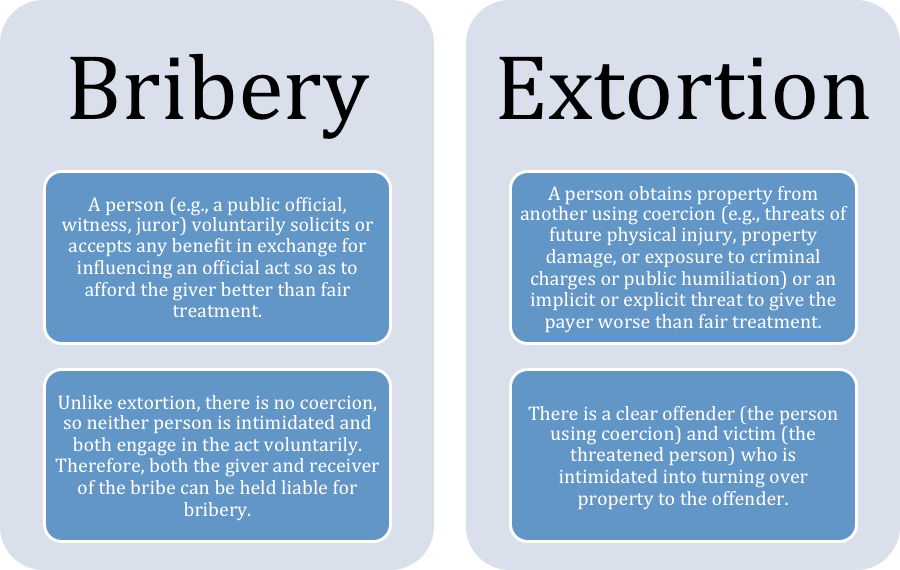 The line between bribery and extortion is rather blurred when a public official expects a bribe for an action they are paid to carry out. Surveys in different countries have found that businesses and citizens often have little choice but to pay what is asked (UNODC, 2013; UNODC, 2017). This situation makes it difficult to assess the true voluntariness of the exchange.